JUNIOR AND THE SACRED FOUR 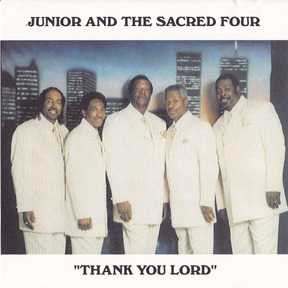 This is Junior's first ever cd, it was issued out of Indiana and seems to be Juniors rarest release. Junior is a West Point, Mississippi native, yet has lived in Indiana for the majority of his life. He's truly a great singer. Junior also recorded on T-Jaye Records, Champ and J&B Records. Including this release Junior has only recorded 3 full albums/cd's, including his rare lp on Champ records. My favorite songs on this cd include "Can't Beat God Giving", "I Got To Have Jesus", Thank You Lord" and "Crosses We Bear" all are great quartet songs which deserve great exposure. 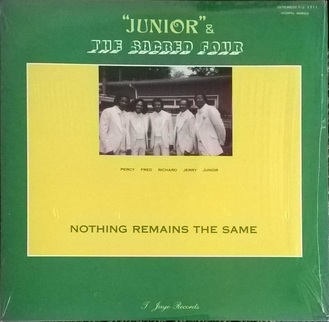 On the back cover there is a photo are four men together listed as Thomas, Reginald, James, James- I can only assume that Reginald is Reginald Gant the drummer, I don't know which James is James Turnbow from "Certainly Lord".

This is the rarest and best of all the T-Jaye lp's; a favorite of both mine and Ted Jarrett (label owner). Junior also recorded a rarer lp on Champ records, i prefer this album though.
© 2020
Powered by