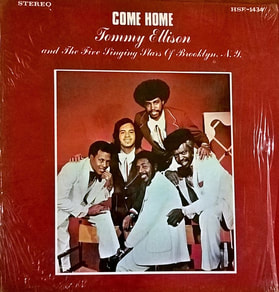 
Tommy Ellison recorded extensively from his base in Brooklyn, New York and his relocation back to his home state of South Carolina; he recorded on labels such as Gospel Recording Co (Brooklyn, N.Y), HSE, Hob, Nashboro, A.I.R., and Marilyn. This Lp is the second Lp that he recorded on HSE; the first was titled "I Am Guilty Of Loving God" . Tommy passed away on January 3, 2009, in Baltimore, aged 76. Tommy was a Salley, South Carolina native that started performing in the 1950's, recording with Edna Gallmon Cooke, The Sensational Nightingales, The Harmonizing Four and The Chosen Gospel Singers, before he become popular in Brooklyn, New York on the gospel quartet circuit with his own group. Tommy returned to South Carolina by the 1980's, where his popularity remained strong; his group was known as Tommy Ellison and The Five Singing Stars Of Brooklyn, N.Y, it would become Tommy Ellison And The Five Singing Stars and eventually Tommy Ellison And The Singing Stars.
© 2020
Powered by