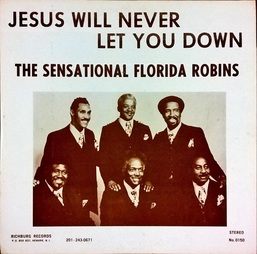 The Sensational Florida Robins- Jesus Will Never Let You Down (Richburg Records 0150), 1980

This quartet was organised in 1960. Carl Davis (manager) and Donald Bennett (Bass player) have remained with the group since that time. While Roosevelt Payne (tenor) sang with The Swan Silvertones for 18 years; while Willie Parker (Lead singer) has been with the quartet since 1965; Carlos Barton (baritone) joined in 1971.
Powered by